The wonders of Uzbekistan 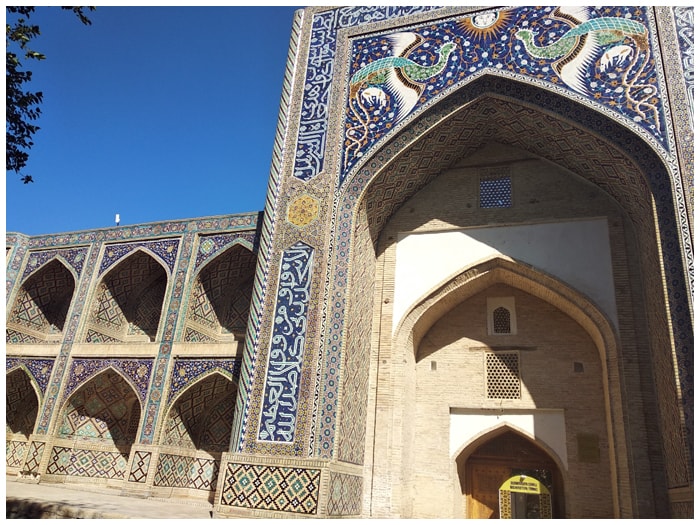 Tour title: The wonders of Uzbekistan

Day 1: Tashkent - Urgench - Khiva (morning flight)
You will start your tour in the capital city of Uzbekistan. You will land at the International Airport of Tashkent and will meet your guide. You will directly take another flight to Urgench city and will be transferred to Khiva city. Khiva has an inner city called Ichan Qala surrounded by the strong walls. Inside the small city we will see many old buildings, palaces, mosques, madrasahs, mausoleums, minarets, caravan-serais and bathhouses. This city is so unique, it became a city-monument in 1969. There are 400 traditional dwellings and 60 architectural monuments inside Ichan Qala city. The main sites in it is the Kunya=Ark fortress from 17th century, which was founded by Muhammad Arang. Also Kalta Minor minaret and Tash Khouvli palace are very important and a treasure of the architectural mastership. The night is in the hotel.

Day 2: Khiva - Ayaz Qala - Toprak Qala - Khiva
This day we will be still in the surrounding area of Khiva and will visit Ayaz Qala and Turpak Qala fortresses. Ayaz Qala was an ancient castle of Khorezm and it was named after a famous Turkic folklore hero Ayaz. The fortress was built in 2nd century AD. Turpak Qala was a royal city of the ruler Artav in the 2nd century AD. And this fortress was occupied until 6th century AD. Many different occasions have destroyed this site and keft without any sign of life. Then we will drive back to Khiva for the overnight.

Day 3: Khiva - Bukhara
This day we will drive to Bukhara city and have a wonderful city tour. There are more than 140 architectural monuments in Bukhara from the middle Ages. This city is like come from the fairytale with its narrow streets, gardens, parks, historical and architectural monuments from different epochs. All the sites are close to each other. The way from Khiva to Bukhara lies through the famous Kizilkum desert. Also on the way we will see Syr Darya River which is the deepest river in Central Asia. This lake formed by the confluence of the Panj and Vakhsh rivers and flows to Aral Sea. In Bukhara we will have a free time and you can walk around and visit the places by your own. The night is in the hotel.

Day 4: Bukhara
This day we will have a full day city tour in wonderful city Bukhara. First of all we will visit the ancient citadel in Bukhara from the 4th century called Citadel Ark which was a palace for the several dynasties of Bukhara Empire. Then we will visit Samanids mausoleum which is a treasure of 9th -10th century. After that we will walk to Chashma Ayub well (Job's well) and will head to Bolo-Hauz mosque also known as the mosque pf forty columns. This mosque was built in honor of the governor of Bukhara Abu-Fayud Khan. Then we will visit the shopping domes of the city and will arrive to the Nodir Divan Begi mosque which is a part of Lyabi House Ensemble a famous central site of Bukhara. The last site we will visit is Poi Kalon complex which a real architectural art of the city with three structures like Kalon Minaret, Kalon mosque and Mir Arab Madrasah from 12th -16th century. The night is in the hotel.

Day 5: Bukhara - Samarkand
This day we will take a train to Samarkand which is the second biggest city of Uzbekistan. Samarkand is very beautiful city and has the same age with the cities like Rome and Babylon. First of all we will visit the main symbol of the city which is Registan square with three madrasahs built in 15th -17th century. Registan square is unique and will be fascinated by the beauty of this site. Then we will move to Shakhi-Zindeh complex which is a collection of the mausoleums from 11th -15th century. It's also a part of UNESCO Heritage Site. Two more site like Guri Emir Mausoleum and Bibi Khanim Mosque, this mosque was built as memory of the favorite wife of Tamerlane. He was inspired after his successful campaign to India. The night is in the hotel.

Day 6: Samarkand - Tashkent (transfer or train)
This day we will take a morning train to Tashkent. Upon arrival to the capital city we will have a city tour visiting the main sites. We will start from the main square called Independence square which was built as a symbol of victory over fascism in World War II. Then we will walk towards Amir Timur square and will pass through the local Broadway. After lunch we will visit the old part of the city with Chorsu Bazaar and Kukaldash Madrasah. The main site in the old part of the city is Hast Imam Complex which has few madrasahs, mosques and mausoleum. The main thing to see in this complex is Othman Quran Copy from 8th century. Othman Ibn Affan was a third Caliph of the Prophet Muhhamad when he had four Caliphs. And this Quran belonged to him. Othman was killed by non-muslim people in 8th century. We still can see his blood on the pages of the book. The night is in the hotel.

Day 7: Flight
In the morning is transfer to airport.