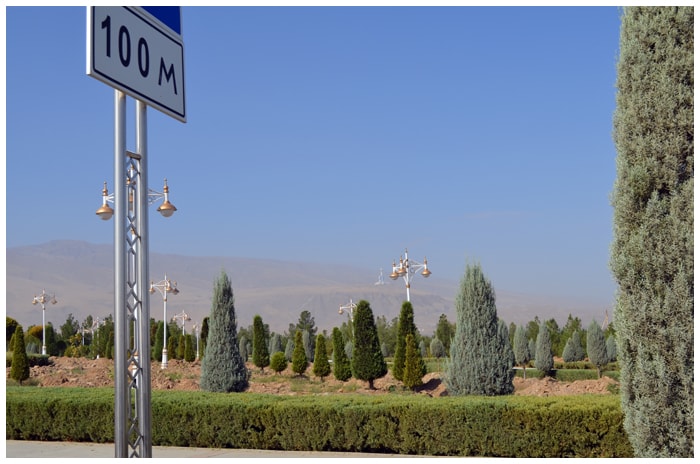 Day 1: Ashgabat
You will arrive to the International Airport of Ashgabat and will meet your guide and your group. Then we will drive to the Ertugrul Gazi mosque. This mosque was built in the center of Ashgabat on the Azadi street in the 90s of the last century. And the name of the mosque is Azadi because of the street on which it was built. This mosque Azadi is the biggest mosque in Ashgabat and can welcome 5 000 people at the same time. The mosque has a Turkish style and was named in honor of Oguzkhan Ertogrul -Osman I. Osman I was a father of the first ruler of Osman Empire. Then we will visit a palace of Happiness and will see the nice view to the Ashgabat city. We can take nice pictures and have some fre time. The night is in the hotel.

Day 2: Ashgabat
This day we will drive to the Nissa ancient fortress. Then we will drive to Kow- Ata underground lake, the lake which is situated inside the cave. The name Kow Ata means the father of the caves. This cave is located 100km away from Ashgabat. This lake is wonderfully beautiful and we need to walk 60km inside the cave. There 350 steps down to the lake. The water of the lake is very medical and warm. The water consists 38elements like sulphur, iodine, magnesium, potassium, sodium, sulphate, aluminium, bromine, iron and stibium. This lake is the biggest underground lake in the world. In the afternoon we will drive to Gypchak village which is a home place of the first president of Turkmenistan. In Gypchak we will see the biggest mosque of Central Asia. Then we will return to Ashgabat. The night is in the hotel.

Day 3: Ashgabat - Darvaza
This day we will start from the city tour in the capital city. We will visit the museum of the carpets which was opened on 24 October 1994. This museum has a very rich collection of the Turkmen carpets from the medieval to the 20th century. And there are also more than 1000 carpets from the 18th and 19th centuries. The museum has also chuvals, khurjuns and torba etc. After lunch we will drive to Darwaza gas crater. We will arrive to the crater and have a dinner near Darwaza. The night is in the tent.

Day 4: Darvaza - Kone Urgench - Dashoguz - Ashgabat
This day we will start from the wonderful view to the crater, the crater has the most wonderful view on the sunrise. Then we will drive to the Kone-Urgench historical site which is in the Dashoguz region. Kone-Urgench is an architectural reserve 480km to the nprth from the capital Ashgabat. In the ancient times it was a capital of Northern Khorezm in the first century AD. In the 8th century it was conquered by the Arabs and in 995 it was renamed to Gurgandzh and became the residence of Khorezm Shah. Gurgandzh also was a largest city after Bukhara which was a capital of Samanid Empire. Then we will drive to Dashoguz a take a train to Ashgabat. The night is in the train.

Day 5: Ashgabat
In the morning we will arrive to Ashgabat and will drive to the horse-farm and will see the famous horses of Turkmenistan. Akhal-Teke horses are very beautiful and it's the pride of the Turkmen people. The Turkmen people were cultivation this breed for many centuries. The exact date of the Akhal-Teke horses is unknown but the first time mention was fund in the 3rd and 4th  centuries BC. Bucephalus which was the favorite horse of Alexander the Great was Akhal-Teke. Then we will drive to Gokdepe village and visit Gokdepe fortress, this place is famous because of the battle between Russian army and Turkmen tribes. Then we will drive back to the city. In the afternoon we will visit a Cultural and entertainment center Alem. We will have a free time. The night is in the hotel.

Day 6: Flight
Transfer to the Ashgabat International Airport to board a flight to next destination.

Note: Each Traveler should have 2 photos (5×6) to be presented at the points of entry.