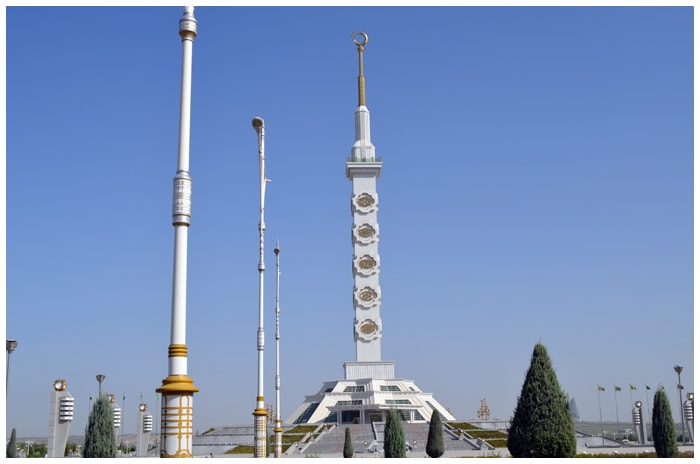 Day 1: Tashkent
This day you will get acquainted with the group at airport. This day you will city tour, the first point is going to be Independence square which is the main square of the country, which was built after the country's independence with many attractions. After you will explore the amazing street the local Broadway, boulevard where there are many artists and souvenir shops. Then you will direct to wonderful attraction Tashkent metro, this metro is famous for its theater-like architecture. After you will explore the old part of the city which includes: Chorsu Bazaar this is a world-famous Bazaar that was formed many centuries ago, Kukaldash Madrasah that seems to support the borders of the vast shopping area with its noble and peaceful appearance and Hast Imam complex that consists of several madrasahs, mosques and mausoleum. A unique historical complex dedicated to prominent and influential public figures. The most interesting attraction of the tour today will be the Quran of Othaman. Caliph Othaman was killed while reading the Koran, and drops of his blood fell on the book. Since then, the manuscript has been a sacred relic. During the long history of Tashkent, the precious book was kept by various rulers. You will spend the night in the hotel.

Day 2: Tashkent - Samarkand (morning train)
This day you will departure to railway station of Tashkent for your train to Samarkand. Samarkand is one of the most beautiful and mysterious cities in Uzbekistan. It is the second largest city in the country. This is one of the oldest cities in the world, the same age as Rome and Babylon, which is considered the cradle of civilization. This day you are going to explore the mesmerizing attractions such as Registan square, Shakhi-Zindeh, Mausoleum Guri Emir and Bibi Khanum Mosque. Registan Square, it is of great historical value due to the architectural monuments of the 15th - 17th centuries, a whole ensemble consisting of three madrassas.  Architectural complex of Shakhi-Zindeh this is one of the most impressive memorial complexes of Islamic architecture of the XIV-XV centuries. The complex is a huge burial place of representatives of the nobility of the Temurid times. Guri Emir is one of the best examples of medieval architecture in the East, translated from Persian means "tomb of the Emir".  Bibi Khanum Mosque a masterpiece of Islamic architecture built in 1404, in honor of Tamerlane's beloved wife. You will rest the night in the hotel.

Day 3: Samarkand - Bukhara (morning train)
This day you will have a morning train to Bukhara. You will have a city tour in the goregeous city Bukhara. You are going to explore Citadel Ark ancient citadel in Bukhara (modern Uzbekistan), stronghold of the last emirs. At one time, the Park, towering over Registan square, was a symbol of greatness, power and inaccessibility.  After you will amaze the fascinating monument Samanids mausoleum is a symbol of the Renaissance and the continuous development of Central Asian culture, which has experienced numerous conquests.  You will fascinate next destination Chashma Ayub, complex, repeatedly rebuilt during the XIV-XIX centuries, means the source of Job. Further you will visit the shopping domes domes and visit one of the most beautiful madrasahs of Bukhara called Nodir Divan Begi it was built by decree of the court vizier Nadir-divan-Begi in 1620 and was part of the famous ensemble "Lyabi-Hauz". You will finish tour with Poi Kalon complex, an architectural ensemble located at the foot of the Kalyan minaret. The complex consists of three structures built in the XII - XVI centuries: the Kalyan minaret,  Kalon mosque and the Mir Arab madrasah. The overnight is in the hotel.

Day 4: Bukhara - Khiva (440 km, 7 hours)
This day you will transfer to Khiva, the oldest city in Uzbekistan full of history and fascinating sites.  In ancient Chorasmia, later known as Khwarizm and Khorezm, in the past a large khanate of West Central Asia, South of the Aral sea. Currently, this is the territory of Uzbekistan and Turkmenistan. The ancient city of Khiva is located on the territory of Uzbekistan and is famous for many historical buildings that have been preserved as a Museum-reserve behind the city wall. Most of the buildings were built in the 19th century and are perfectly preserved to this day. A trip to Khiva will give you the opportunity to imagine what other Central Asian cities were like in the past.  This day you will drive along Kizilkum desert one of the greatest deserts in Asia, located between the rivers Amu Darya and Syr Darya. Today you will also admire the view to Amu Darya river, the largest river in Central Asia. After arrival you will have free time for rest, night will be in the hotel.

Day 5: Khiva city tour
This day you will visit the remarkable highlights of the city. You will discover Ichan Qala, there are about 60 architectural monuments and more than 400 residential buildings of that time. The construction of Ichan-Kala was started in 1598. The height of the Ichan-Kala wall is up to 10 meters, the thickness is 5-6 meters and the length is 2650 meters. According to archaeological data, some sections of the wall still existed in the V-VI centuries. The city also has a huge number of madrassas and mausoleums of various rulers of Khiva. Since 1990, Ichan - Kala has been listed as a UNESCO world heritage site. One of the most prominent attractions will be the Kunya-Ark fortress dating back to 17th century, found by Muhammad Arang Khan, Kalta Minor minaret and Tash Khouvli palace, the main Palace of Khiva khans. It was built in 1838. Allakuli Khan wanted the Palace to be built in 2 years, and it was built in 8 years. The overnight is in the hotel.

Day 6: Khiva - Shavat border - Kune Urgench - Darwaza
Today you will depart to Shavat border.  You will be net by the group in the morning at Shavat/Dashoguz border, and after you will explore the architectural monuments of Kune-Urgench, Khorezm capital 10th -12th centuries. In course of the tour you will experience the Mausoleum of Najm al-Din al-Kubra, Tyurabek-Khanum, Il-Arslan, Tekesh Ibn Hadzhibey, inspection highest minaret in Central Asia KutlykTimur. In the afternoon you will drive to the Karakum desert to Darwaza. You will be impressed by the Gas Crater. In 1971, Soviet geologists discovered an accumulation of underground gas near the village of Darwaza in Turkmenistan. As a result of excavation and drilling of an exploration well, geologists stumbled upon an underground cavern, which caused the earth to collapse and form a large hole filled with gas.

Day 7: Darwaza - Ashgabat
After breakfast you will transfer to the capital of Turkmenistan Ashgabat. You will accommodate and rest about 1 hour. In the afternoon you will departure to the village of Bagir, where you will reach the Parthian Fortresses of Nisa. Along the way you will experience Mosque. Today you will also explore Russian bazaar, Lenin square, Ertugrul mosque. In the evening you will visit the major attractions of the city. Visit new parks, a huge complex with fountains and statues of the great men of antiquity.

Day 8: Flight
In the morning is transfer to the airport.

Service does not include:
- Visa
- Full board
- Migration tax
- Travel insuranc
- English speaking guide
- Entrances to all museums

Note: Each Traveler should have 2 photos (5x6) to be presented at the points of entry.

All rights reserved.
Powered by SpinStyle